My writer's world has been filled to the brim with all kinds of happy. So many of the people I have been following have been experiencing writing success over the last year, whether it be from successful self-publishing, signing agents, and/or garnering fabulous book deals.

Yesterday was another one of those happy days. Theresa Paolo's book, (Never) Again, released through Berkley (Penguin), had its book birthday!! Yay!!! Virtual confetti and streamers!!

Isn't this a beautiful cover? 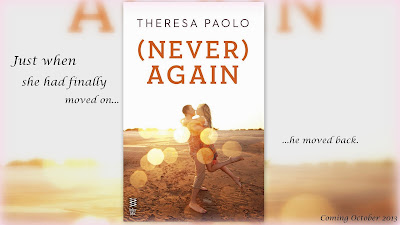 When college freshman Liz Wagner hears her ex's voice for the first time since he moved clear across the freaking country, she does what any respectable girl would do: Dive into the girls' bathroom.

Zach Roberts—the Zach Roberts—is back. And he’s everywhere Liz looks—infiltrating her friend group, buddy-buddy with her brother. It’s enough to ruin college altogether. But what choice does she have but to put on a happy face and pretend he didn't leave her vulnerable and alone in a pile of emotional wreckage?

Pretending works, until tragedy strikes and the only person available for comfort is the one person she wants to stay away from. When Zach turns out not to be the jerk she convinced herself he was, but the boy she used to love, Liz needs to decide whether to open her heart again to the boy who tore it out.

As part of the festivities, Theresa is having a blog hop, where we are supposed to tell what it is we have sworn to never do again, but end up doing anyway.

Thing is, I have a TON of things I say I won't do and end up doing, or swear to do that I don't do.

Probably the biggest is food related. I can be a binge eater - especially of cookies, cake, candy, bread, ice cream, potato chips, goldfish crackers... You know, those foods that taste really, really good. I'll easily down half a dozen or more cookies in the form of cookie dough. Eating a couple of candy bars when I'm stressed is common. I won't even get into my ice cream eating habits.

After I have been a total glutton, the self-recrimination starts. I lost the battle for self-control. I gave in. Again.

I waddle out to my chair, ask my husband if he still loves me (he always does), get some hugs from my kids and grimly promise myself I'll never, ever eat that much again. And somewhere, in the corner of my mind, I know the truth. It's only a matter of time.