Things You Might See While Playing Pokemon Go: August 2019

Another month has passed! Time just keeps flying along and I'm straggling behind a good majority of it. However, I'm alive and life is good. If I don't quite get everything done as I plan, it's okay. This has become my mantra so I don't beat myself up for failing to meet my time goals.

I have to admit something, though. I've been working on planning my story (still) and I'm finding all the choices are starting to give me anxiety. Now that I'm aware of this writing hazard, I'm trying to talk myself into not freaking out, making decisions and relaxing into the story. How strange that the very thing that makes story writing fun also stresses me out.

Anyhoo - we had a fun month playing Pokemon Go and I walked a ton.  Getting up early to walk the dog and play a little PoGo has become habit, so I actually look forward to it.

These first photos are from downtown Lincoln. We went early in the month to purchase a cello for Boy 1 and drop off Boy 2's saxophone to be fixed. I'm happy to report the cello has a beautiful tone and the saxophone is quite jazzy! Lots of Ralts Pokemon were caught because it was Community Day. It was a really pleasant day. 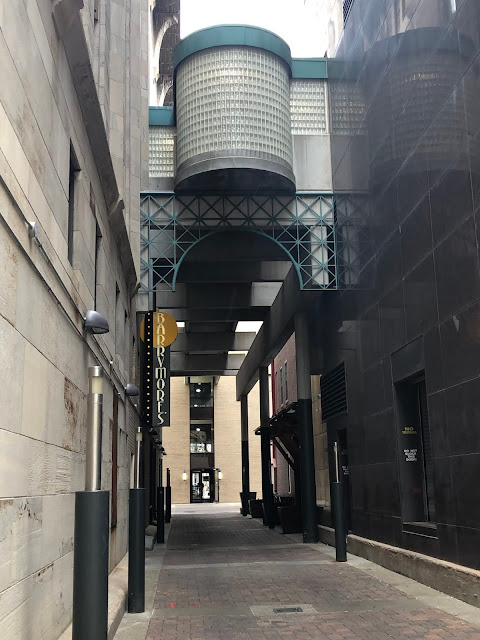 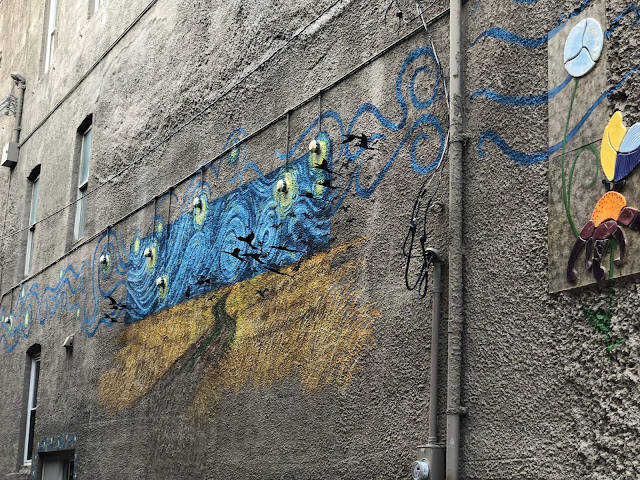 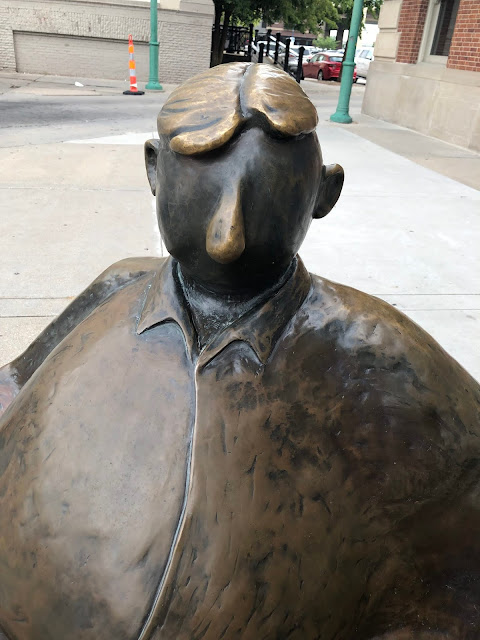 This little grotto is in my hometown. The funny thing is that, until my husband mentioned it, I totally didn't realize that those plants are actually just weeds. 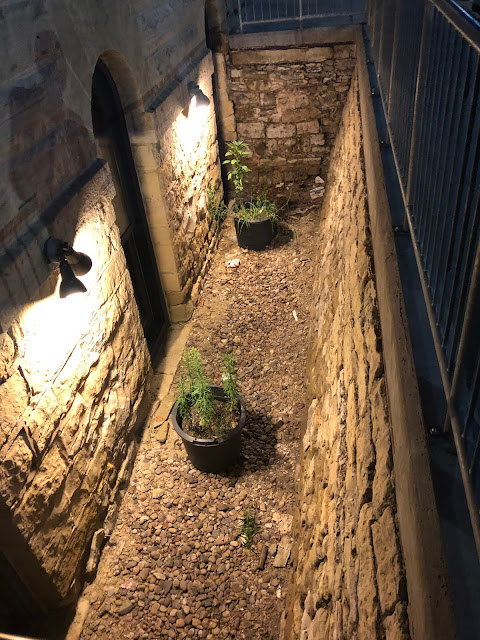 I had a ton of sunrise and sunset pictures, but instead of boring you with all that beauty, I picked the best one. This is around the corner from my house. 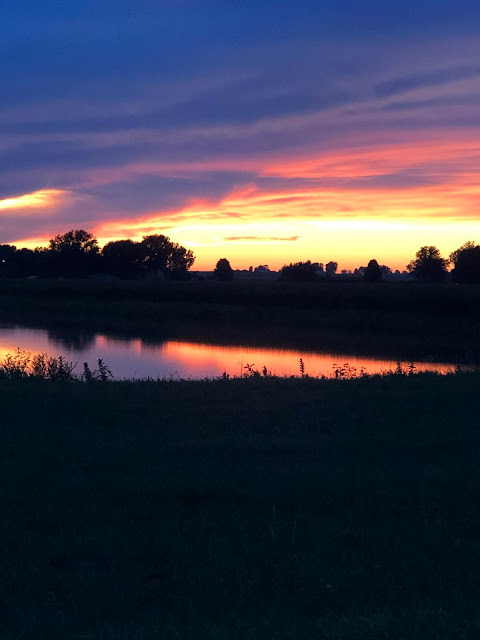 Another picture from a park in Lincoln from when we went to pick up the saxophone last week. 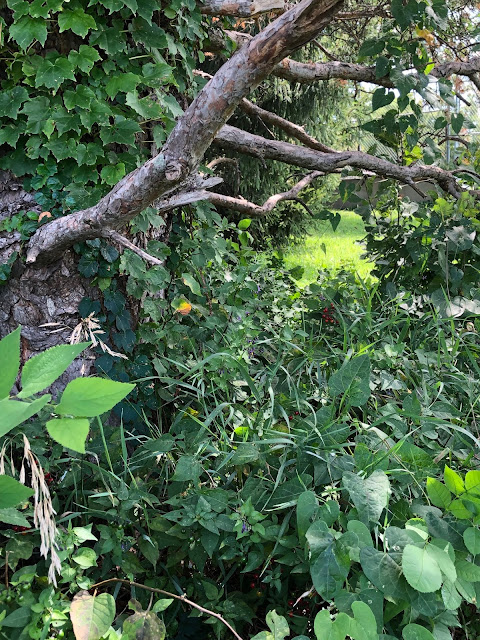 I have seen some gigantic dragonflies and praying mantis this week, but I was able to take a photo of the cicada drying its wings after hatching. Absolutely beautiful. 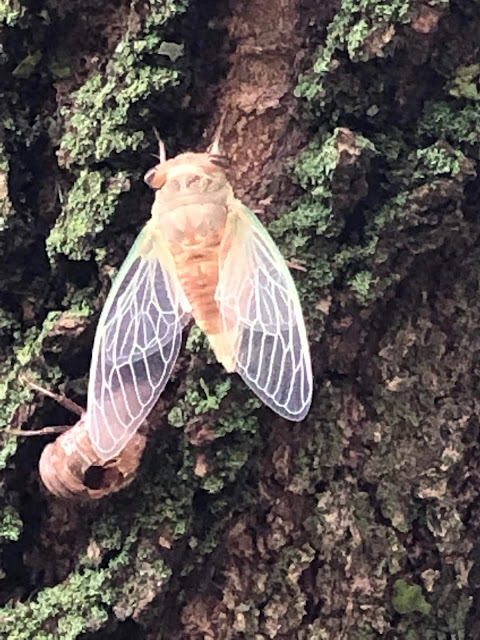 Here's to a fast August and hopefully a lower-key September. Maybe we'll have a moment to catch our collective breath and relax into fall.

How was your August? Did you see anything interesting you'd like to share?
Posted by Lara Schiffbauer 5 comments:

When Boy 1 was two years old we watched Iron Man on DVD. He was totally entranced with the movie. At the scene where Tony comes out of the cave with the flame throwers, he shouted at the men on the tv to run. The next time we went to the store he wanted an Iron Man action figure. He even slept with it for quite a while.


Starting at that moment in 2007, Marvel became the background of my family's life. I watched my boys grow up as we watched Marvel movies together. Some of the fondest memories are the discussions we had in the car going to or leaving the movie theatre. I can count Christmases based on what Marvel toys they got. Thor and Loki's love/hate relationship is similar to my boys' relationship. They're kind of at a Thor 3 relationship, currently. It's nice to see them supporting each other more.


Boy 1 is now 13 years old, Boy 2 is twelve and Iron Man is no more. Endgame ended Marvel's first phase right when my kids' childhood ended. They are no longer shorter than me, chubby cheeked, bright eyed and wanting to play with Iron Man and Thor toys. They're struggling to find their balance between being children and being adults, finding out what kind of people they're going to be.

Perhaps that's why I didn't like Endgame very much. There's a parallel between the end of the Avengers as we know it and the end of my role as the parent of young children. I'm entering undiscovered parenting country. 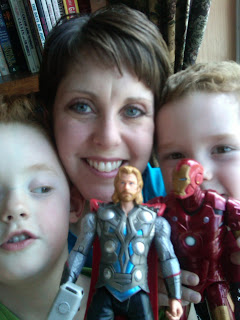 I was grateful to have Spiderman: Far From Home to help demonstrate how to live in a world without Tony Stark. Because, as is noted in the movie, life does continue on after loss. My kids are going to continue to grow up (God willing) and become men and move away to have their adult lives. Hopefully they will be good and kind people. I'm hoping they will have internalized some of those self-sacrifice, humility, strength, standing up for good against evil lessons found in the Marvel movies.

Thank you , Marvel, for the good times and the good memories.

I love you 3000.
Posted by Lara Schiffbauer 2 comments:

Writing Ruminations: How Do I Cozy?

Many years ago--about 10, to be precise--I decided to try my hand at writing fiction. I cut my teeth on short stories while I learned about the three act structure, hook lines, characterization, sub-plots and sub-text. I read craft books, attended writing conferences, perused writing magazines and even took some online courses. I put my writing in front of anyone who might read and offer critique.

Finally, Voila! I had written a novel. And then I even wrote a second one. Granted that one took a whole lot longer to finish, but that's another post.

I started thinking about my next novel and realized that I wanted to try something a little different. It was time to try...a cozy mystery.

I turn to all the experience and education I'd gathered over the last ten years. I try to organize myself. I try to characterize. I try to plot. I try to figure out exactly what the heck I'm supposed to put into a cozy mystery. I check blogs. I check books. I create spreadsheets. And still...


It feels like I'm starting over at the beginning all over again. Same sense of not having a clue and not really knowing where to go to get the answers I need. My spreadsheet has helped, but even though I've been able to meet my goals for the basics (character development, setting development, etc...), when I get ready to start plotting, I feel a little lost.

Elizabeth Spann Craig has a great blog series about the basics of writing cozy mysteries. It's helped me to see the general process and she has a ton of links to other resources on the internet.

Just last week on Twitter Kellye Garrett shared a book she used to write her award winning Detective by Day mysteries. It's called Writing and Selling Your Mystery Novel by Hallie Ephron. I'd actually seen it a couple of weeks ago at the Barnes and Noble in Lincoln, but didn't purchase it at that time because I wasn't sure it would be helpful. After Kellye Garrett's recommendation, I made sure to stop by the Barnes and Noble this past weekend when we were in Lincoln picking out a cello for Boy 1 and grab the only copy.

So far it has been enjoyable to read and the exercises at the end of the chapters are practical, definitely doable and helpful for clarifying what I need to be doing to plan the novel before actually writing it. Since I'm a plantser, this very much appeals to me.

I plan to keep to my spreadsheet goals, but use the book to help me fill out the plotting part, most especially. I may switch to completing chapters by a deadline, but haven't really gotten deep into it to decide.

What do you do when you need guidance? Do you have a trusted person who is your go-to? Or do you prefer to utilize books and blog posts?

**Quick note: I STILL can't access my comments. I don't know what to do, but I wanted to say thanks to Joe and Cindy for the nice comments!!
Posted by Lara Schiffbauer 2 comments: