If you are looking for the Query Corral Blog Hop entry, please go here.  Otherwise, read on!

Who is Vaughn Roycroft, you may be wondering?  Well, he is a talented writer, new-ish to blogging blogger, and embodiment of kindness on the internet.

Vaughn has guest posted on Writer Unboxed's blog a time or two, and written book reviews for the sister site Reader Unboxed.  It was through these posts that I became aware of the fine writing skills Vaughn has, and in my comments, I selfishly encouraged him to get his own blog so I could read more of his writing.  Thankfully, that did happen, and his blog, Seeking the Inner Ancient, went live (along with his cool website) this year.  My only complaint is that I wish he'd post more often! (And I mean that with all kindness, Vaughn!)

We finally bonded a little over my post The Magic of Star Wars and Writing.  Through Facebook I learned that Vaughn is a kind, interesting person -- just the kind of person I would love use as my guinea pig for my first blog interview.  So, without any more talking from me, I would like to present Vaughn Roycroft, the first ever interview at Motivation for Creation! 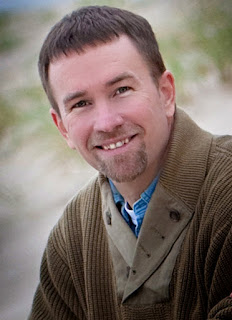 Welcome, Vaughn! Could you please introduce yourself to us, and share with us some of your favorite things?

I’m a husband, a writer of historical fantasy, a carpenter, and a former businessman. I love spending time with my wife, my black lab, music, reading, a good laugh, walks on the beach, cooking, the spooky feeling that accompanies being imbued by the muse.

Would you care to share a little about your current work? Where are you in the process of publication?

I completed the first draft of a trilogy a few years ago, and have subsequently written a ‘prequel’ manuscript, examining the trilogy’s backstory (kind of like Star Wars, eh, Lara?).

Short version of all four, starting with the prequel: A Goth chieftain sets out to restore his father’s honor, and is told by a mystic that he and his progeny are destined to greatness. He begins a disastrous war of conquest with the Roman Empire. In seeking to ensure his foretold legacy, he marries two prominent women who each bear him a son. One son goes on to be raised within the fold of empire, and the other is raised in his tribe’s homeland among his mother’s royal clan. The trilogy examines the rise of the sons, and how each responds to his so-called destiny, against the backdrop of the their two peoples’ epic culture clash. Oh, and there’s an all-female warrior sect entangled in there. Can’t go wrong throwing in some kickass warrior chicks, right?

I’ve gone through two rounds of submissions with book one of the trilogy without a sale. This last time I was fortunate enough to receive several wonderful rejections (that’s a funny phrase, but it’s true—anything you get beyond a form letter, be thankful and listen up). I’ve worked on ideas to streamline the opening with my fabulous critique editor (Cathy Yardley, of Rock Your Writing) and some wonderful writing friends who’ve been kind enough to beta read. Round three coming up!

Name the three things that are most important to you.

My wife is clearly numero uno. I’d be lost without her. She’s my first reader, my biggest supporter, my best friend and my soul mate.

Next, my cottage in the woods and the life we’ve built here in our little beach community (including daily walks along the shore).

The third would have to be my writing journey. It began a bit late in life, but it has been hugely rewarding. I’ve learned so much and have met so many wonderful people (like you, Lara). My relationships and insight into my life and the world around me have been greatly enhanced. I am blessed, whatever comes of my quest for publication.

What/Who are your writing influences?

I’ve often mentioned the importance of Tolkien in my life, but reading the Hobbit and The Lord of the Rings affected my literary life more than any other single thing. It demonstrated the possibilities for being immersed in another world and yet inspired to emotions that are definitely of this world. I didn’t want it to end. Turning the last page, and being satisfied and yet left with that longing for it to go on, was what led me to imagine the possibility of trying to create such a world and to inspire such feelings in others.

Currently I’m working hard to adapt my work, and my future method, to utilizing the elements of story structure. This is largely in response to the positive influence of my online writing tribe—most prominently in the person of my aforementioned editor, Cathy (plotter extraordinaire). I was a dyed-in-the-wool pantser during the writing of the trilogy. Now I’m going back through and adapting/honing my work to fit the elements of structure. It’s a big job, but I was fortunate to have had either the instinct or dumb luck to have crafted fairly good bones in my early drafts. And I can see what a positive effect it’s having on my work.

Do you believe in everyday magic? If so, give an example of why.

In a recent discussion about the mystical versus the scientific in regard to writers having a muse, I weighed in on the side of the mystical. I believe there is so much more going on than can be easily explained. Those on the other side claim that those amazing story elements that occur are just a byproduct of our brain’s complexity—the result of accessing our cognitive subconscious. Even if science proponents are right, it’s still pretty damn magical to me. Even if I’m self-deluding, why would I want to live in a world without magic?

A new-to-writing Writer comes up to you and asks for your advice. What would you tell them?

I would tell them not to wait around. Start! Today!

I always knew I’d write, but I wasted a lot of years saying, “someday, when there’s more time, I’ll start.” Just begin, anyhow, anyway, even if you only spend fifteen minutes a day on a rambling outline. Don’t muse, write! Get something on paper.

Another thing I would advise might sound controversial. I’d tell them to avoid seeking online writing advice or publishing information—at least during the writing of the first draft. Read a craft book or two (I’d recommend On Writing, by Stephen King and The Art of War, by Steven Pressfield), but then stay off the internet and just write!

Your head will be swimming in the ocean of the online writerly world soon enough. Get out a draft without any of that influence. Do it for the love of it. Do it for you and no one else. All future work will belong to others (editors, agents, readers, etc.). During that first draft of that first manuscript, just rejoice in the exhilaration of freeform expression—rules, advice, gatekeepers, readers, et al be damned.

I said earlier I’d be lost without my wife. This is part of it. I’m a realist with pessimistic overtones. All too easily, I get caught up in a woe-is-me mind-frame. My wife is the eternal optimist. She believes in me more than I believe in myself.

What motivates you to be creative? (i.e. Write, but any other type of creativity is fine, too!)

Hardest question, by far. When I was in business, most of my creativity was devoted to problem-solving. For example, designing a system or a new piece of equipment to overcome an obstacle to production. This creativity had the simplest motivation: profit. I also developed a love of cooking over those years, mostly as a way to relax. Over time a secondary motivation crept in for both: I was being praised for doing them well. It felt good.

Writing, at first, was a completely different beast. For a long time I kept it secret, and honestly never planned to show it to anyone. It took me several months to even tell my wife about it. Even after she knew, I told few others. It’s still a huge, difficult leap for me just to hit the send button, every time (and will be even for this interview). I do feel quite gratified by praise, but it wasn’t what I sought in starting, and I’ve come to see there’s more at work here.

I’m taking a long road to get there, but bear with me. I think I started writing in a quest to answer some big questions about life. It was ’03. My old feelings from Tolkien were reawakened by the release of the LOTR movies and a rereading of the trilogy. 9/11 was a fresh memory. We’d suffered some tough losses. In hindsight I see myself grappling with the meaning of love, honor, choice, destiny, and legacy (we have no children). I was also coming to grips with death (my own mortality, the loss of loved ones, and my fear of losing others dear to me).

When I finally started allowing a select few to read, the first outside of family was a dear friend. After he finished, he and I literally spent an entire day talking. The fact that he was moved, that he was able to apply the work to his own life, and that it left him grappling with the same issues as I had in writing it, threw a whole new light on my journey. I knew then this was my life’s work, that it could really matter. It’s the greatest motivation there is.

Thanks so much for having me on your wonderful blog, Lara!

Now that you've had an introduction, head over to Vaughn's blog and read all the great posts he has there, such as Originality Isn't Everything, What Building my House Taught Me About Writing (and it's a beautiful house - there's pictures!), and of course, because you can't have too many warrior chicks, Regarding Kickass Warrior Chicks.

Please come back on Friday to help me celebrate my Life List Club Milestone party.  I'm going to try and incorporate Funny Photo Friday into the celebration, and I'll be giving away an Amazon gift card to a random commentor.  Also, between now and then, I've got some awards to pass on, as well.  It's going to be a busy week!
Posted by Lara Schiffbauer